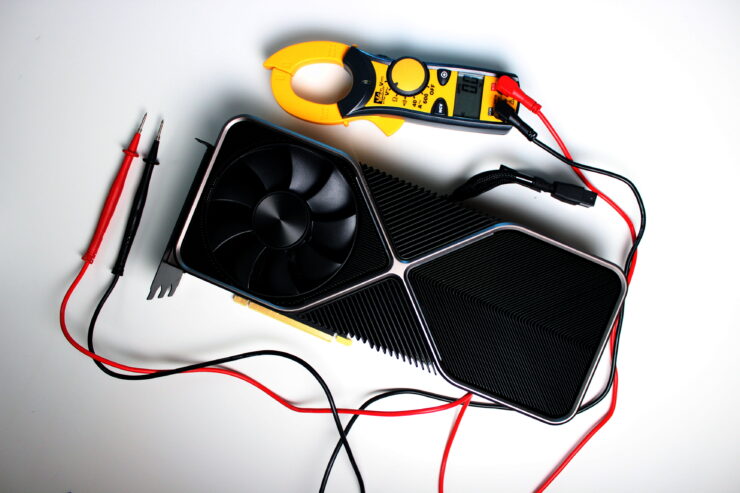 I’ve been tinkering about with undervolting ever since my days of running an FX 8350 and R9 290. Why? Better thermals, similar performance, lower power draw, it was a win all around. I’ve found that even in recent times it’s still a useful thing to give a go, I did it with the RX 480 and Vega some time ago and I run my Ryzen 5 3600X undervolted to control temp spikes. But with the RTX 3080, I just had to give it a go. Could I tweak down the power draw from its 320w TGP and maintain as much performance as possible? Yeah, yeah I could.

Okay enough of that, how about a real quick run down step by step to get your RTX 3080 undervolted (same steps apply to Turing but voltages/frequencies will differ). I use MSI Afterburner and its voltage/frequency curve editor as my tool of choice for my GeForce undervolting adventures.

NVIDIA’s Official Response On GeForce RTX 30 Series Issues: SP-CAP vs MLCC Groupings Vary Depending on Design & Not Indicative of Quality

When you open up MSI Afterburner strike CTRL+F in order to open the Frequency/Voltage Curve Editor displayed in the window on the right in the image above.

Now that you have the F/V Curve Editor open reduce the core clock to around a -290MHz (I found this as a good starting point thanks to the team at GPUReport). This will reduce the entire curve to keep GPU Boost from going wild with the higher voltage allowance as the card attempts to boost back up.

Once you’ve hit apply you’ll see the entire curve change. This is showing that once the GPU reaches that frequency at that voltage it’ll stop, the curve dictates there’s no reason/benefit for the GPU to push past that voltage because it won’t benefit from a frequency increase.

Now you’ll want to test it, in every game or application you use or will use. If it’s unstable then choose whether to drop the clocks or raise the voltage. But it’s going to take you a while to confirm stability, that’s why I didn’t rush this out last week when I started on it.

I found that our Founders Edition is 100% stable with a target frequency of 1890MHz at 862mV without losing much, if any, in terms of performance. but if I wanted to go for even more reduction I can get the same stability at 1815MHz at 806mV.

We need to compare the results to see the benefit or even if there is one we need to compare against stock settings and another point of reference. We ran the benchmark for Forza Horizon 4 at 4K Ultra settings with the RTX 2080Ti and the RTX 3080 (with the performance undervolt of 862mV) and found the performance of the undervolted RTX 3080 to be just a hair behind the stock configuration but pulling EVEN LESS power than the RTX 2080Ti while being 27% faster than the RTX 2080Ti. These tests were run on the same test bench we used for the GeForce RTX 3080 review. 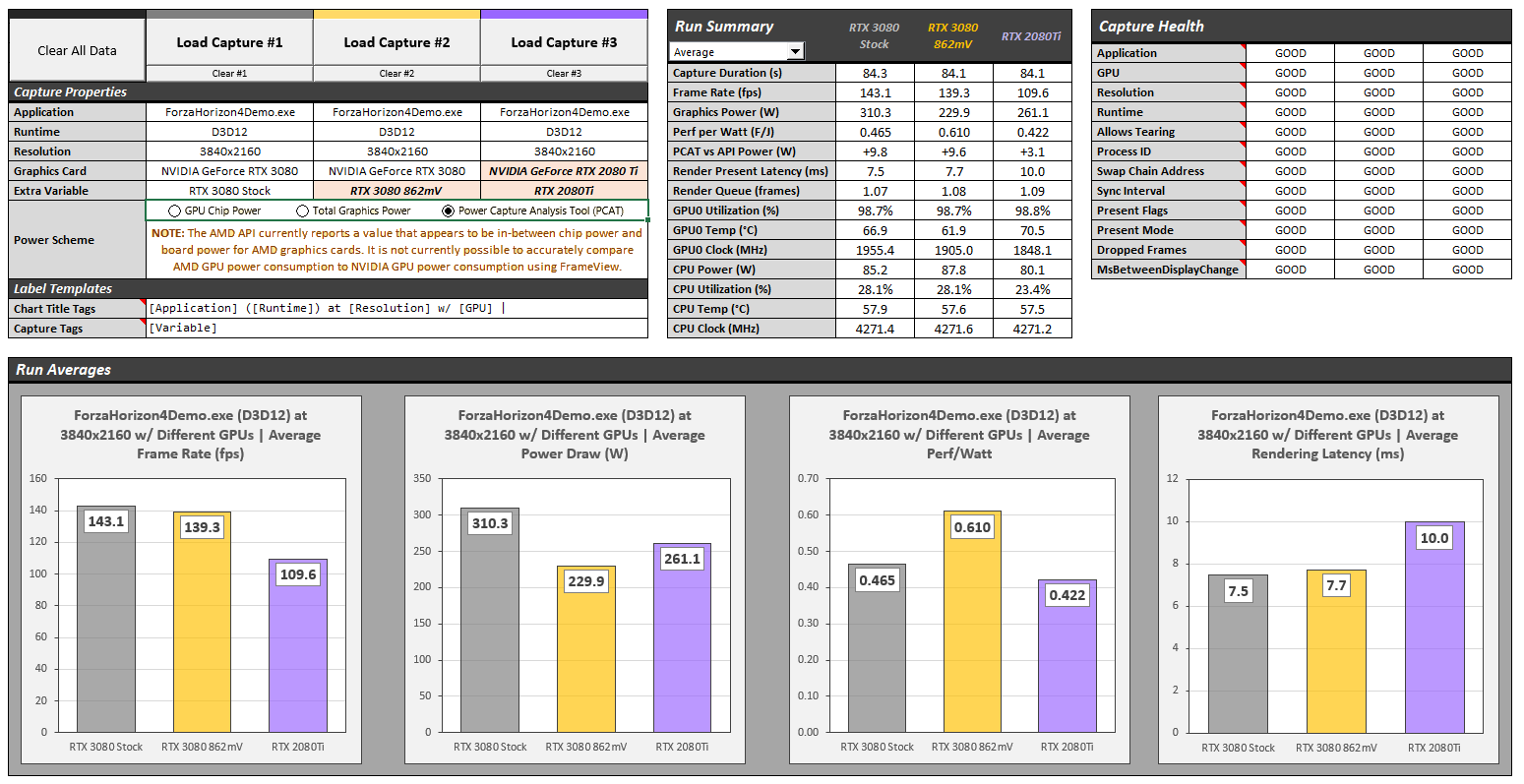 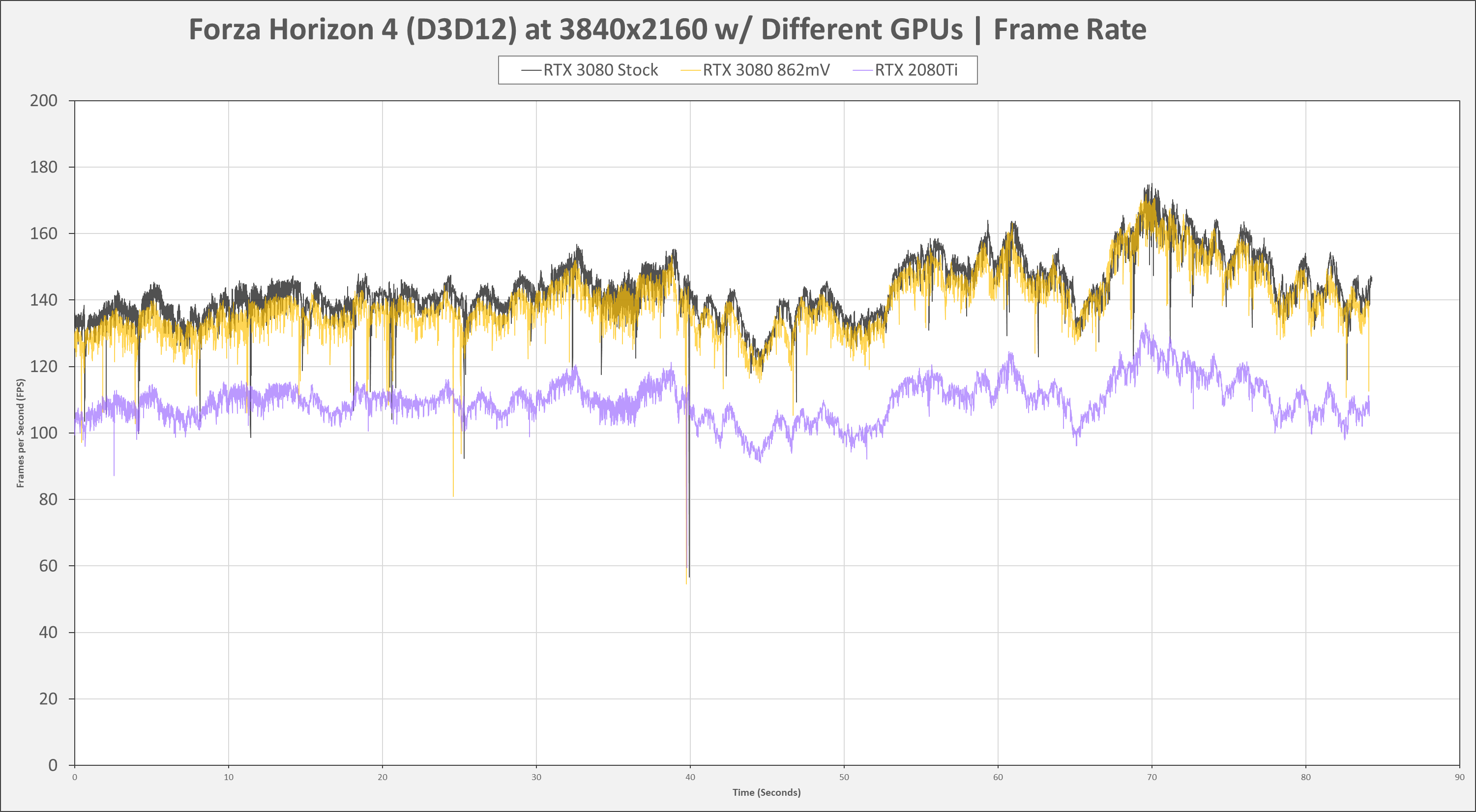 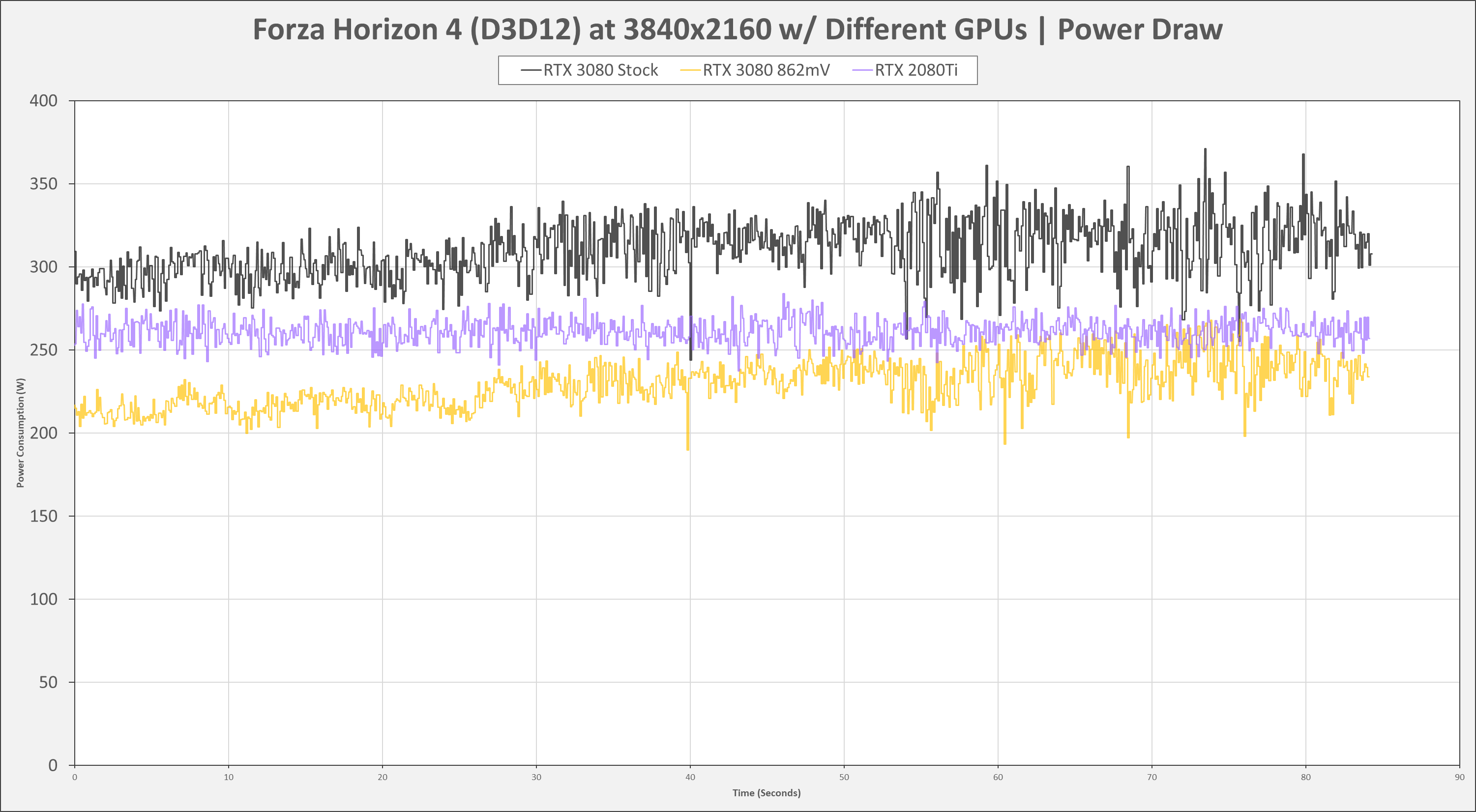 How Low Can You Go?

That’s great and all, but can we go lower? You betcha. I took things down a notch to see if performance dropped off as we went just a hair lower on the voltage curve. Dropping down to 806mV we found the highest target achievable was 1815Mhz, which is technically over the rated boost clock still. The initial undervolt dropped our total board power consumption by 26% but this one nailed a whopping 35% reduction in power draw! 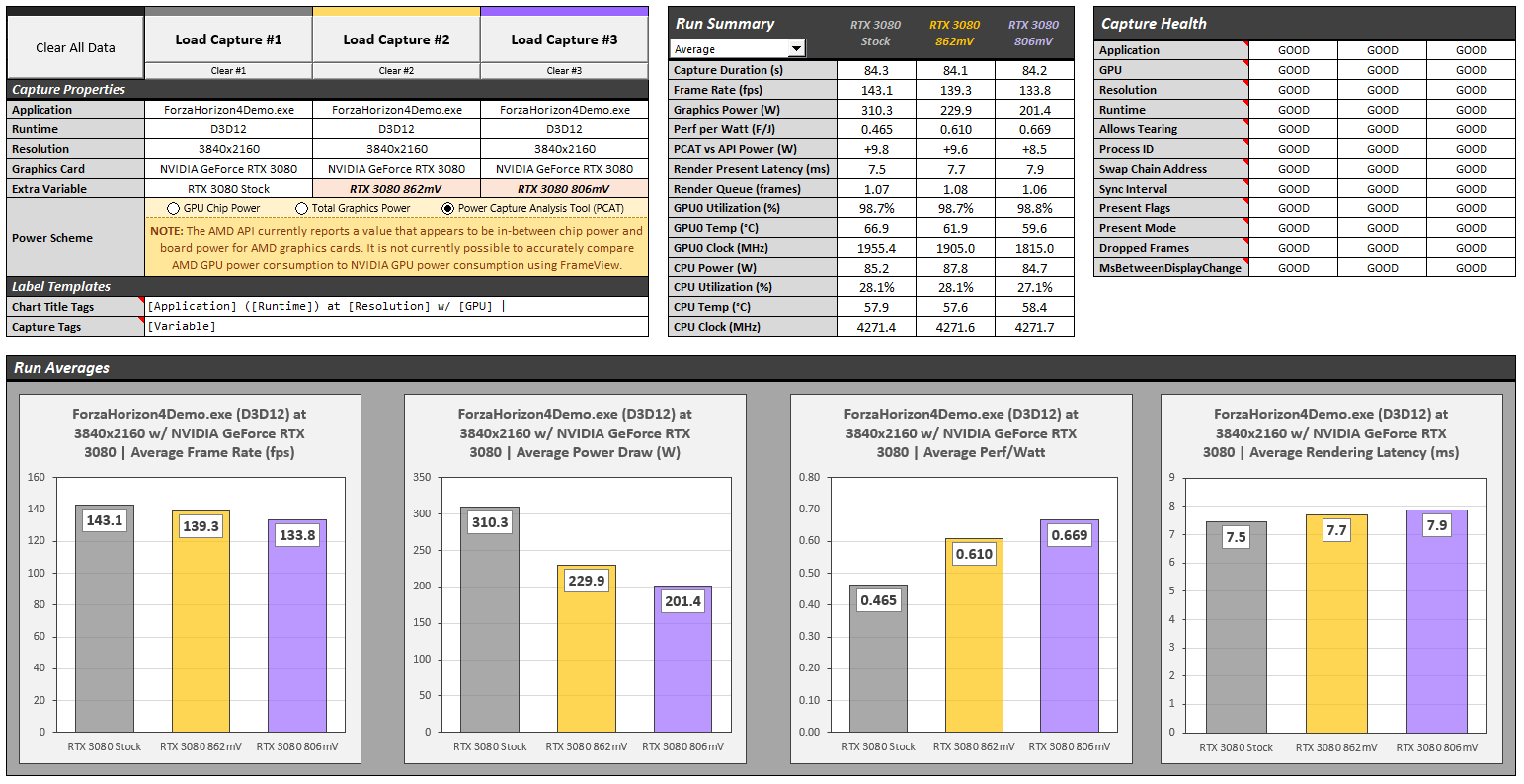 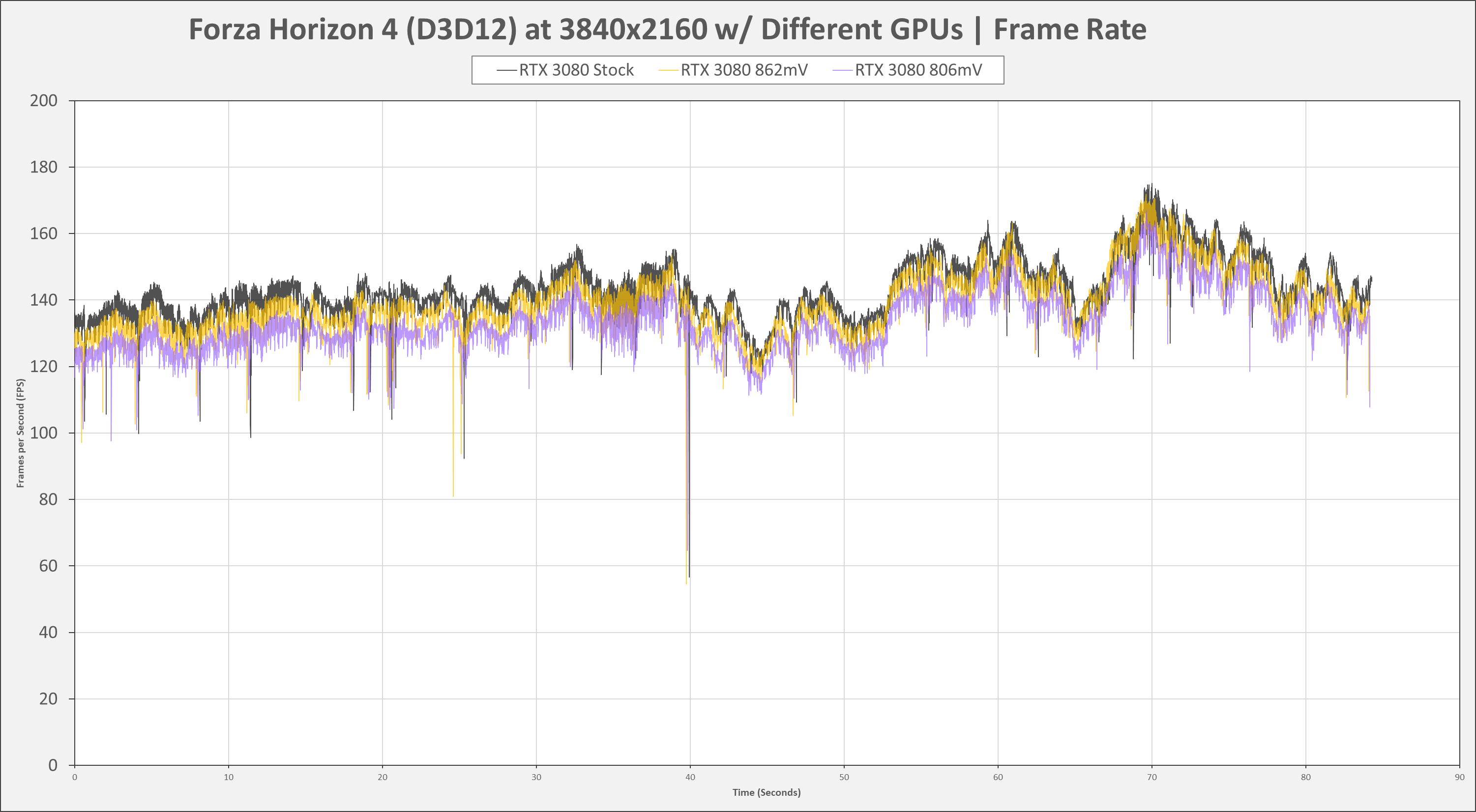 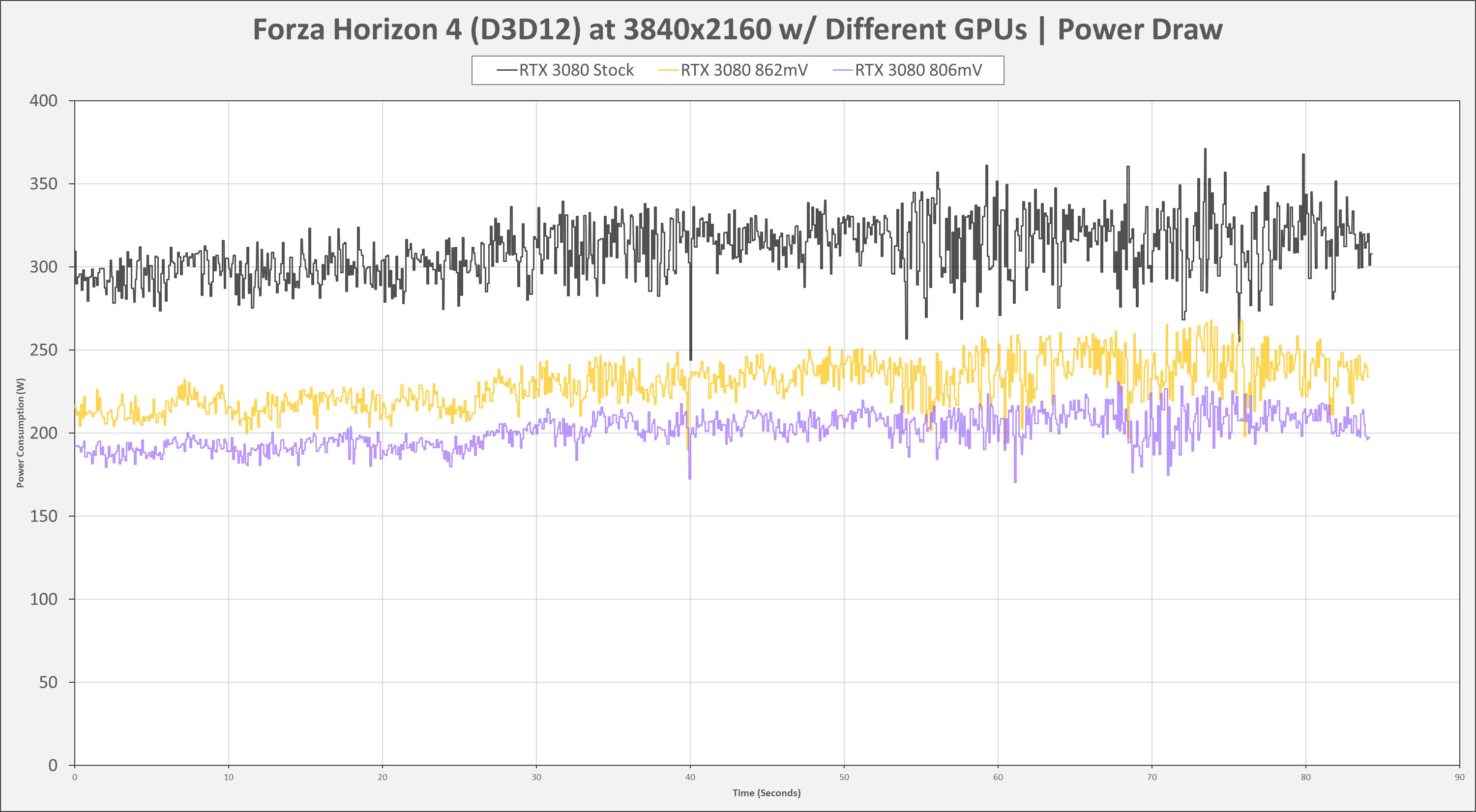 What Does This All Mean?

I can’t go further without making sure I mention that your mileage may vary, you might not get any benefit, and you might get more benefit than I did. That said, if I had a GeForce RTX 3080 of any flavor I’d be giving this a hearty try. It works the same for the RTX 3090 and I imagine the upcoming RTX 3070 will as well. Both of these undervolts are easily achieved and were stable under every scenario that I put them through. There are a few outcomes worth exploring, and the biggest is in future releases. I can easily see fine-tuned custom cards coming in the future, small form factor versions of the RTX 3080 could easily be made if these numbers are achievable across a large swath of cores.

There’s a lot of scaling down that can be had and shows that while the Ampere core can scale with power doesn’t mean it has to, vendors could choose to reign it in and make a super-efficient version of the RTX 3080. Another outcome that is possible is something I noticed over time with the Radeon RX 480 where over time the voltages the card ran at were slowly reduced over time to the point the later drivers ran the reference card just like my undervolted version.

Long story short, if you’ve got a GeForce RTX 3080 then overclocking might just not be the direction you want to strive for but rather this direction, make it even better. I was able to easily get the RTX 3080 pulling less wattage than the outgoing RTX 2080Ti and still run away from it in performance. And the longer you game the better the undervolt will serve you, just check out that video in here where you can see the clock rate remains way more stable by the end of the Horizon Zero Dawn run as the thermals stayed 4-5C cooler without even trying.