1usmus’s highly anticipated ClockTuner Utility for AMD Ryzen 3000 CPUs is now available for download. The new tool not only aims to help deliver increased performance for Zen 2 Ryzen owners but also improves efficiency by reducing the power draw of Zen 2 based processors.

Unveiled back in August by 1usmus, the ClockTuner Utility for AMD Ryzen CPUs is specifically has been designed to increase the performance of Zen 2 based processors that include Ryzen 3000 & 3rd Gen Ryzen Threadripper CPUs without increasing the power consumption. The utility can be downloaded at the following link: 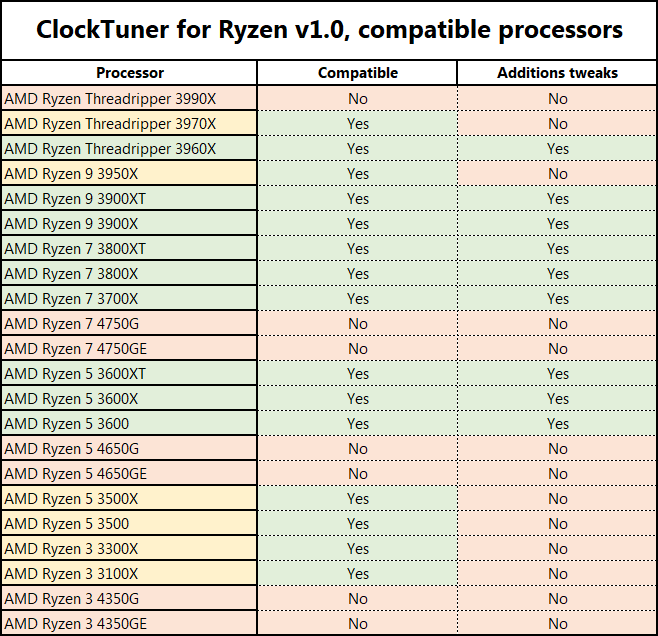 System requirements and preparation for work

The next set of requirements are also mandatory and apply to UEFI (BIOS) settings. Since the success of CTR depends heavily on the capabilities of the motherboard VRM (highly recommended to read this chapter – link), we need to make a kind of foundation in the UEFI (BIOS) to secure the process of tuning the system from BSOD.

The most important setting is LLC (Load Line Calibration), my recommendations are as follows:

It is recommended to use additional settings for ASUS motherboard owners:

How to install CTR

How the tool achieves this is quite complicated but 1usmus’s CTR is fully automated so users don’t have to worry about anything. It is explained that the utility will increase the overall performance of AMD’s Zen 2 processors, specifically those that feature a chiplet based design, by undervolting each of the individual CCX modules. By performing an undervolt on each CCX, Zen 2 processors are shown to not only run faster but also cooler. This also drops the overall power consumption while the CPU can retain an active-state for all the energy-saving technologies.

Another key feature of CTR is Smart Overclocking which evaluates the quality of each CCX & adjusts the frequencies individually. A special preset of Prime95, also developed by 1usmus, is embedded within the utility which evaluates the quality of each CCX. An algorithm has been designed which fine-tunes the frequency for a balanced operation for all CCX’s without shifting the load on the CPU nodes (modules).

Prime95 isn’t the only evaluation software embedded within CTR. 1usmus has also featured a plug-in test package of Cinebench R20 which not only evaluates the overall performance of the tuned CPU but also shows the CPU voltage and power consumption as a part of the efficiency tests that have been achieved while running the built-in Cinebench R20 benchmark.

1usmus’s has stated that CTR will be free for everyone to use and offers better performance than most overclocking utilities or automated boosting techniques that motherboard vendors offer that only deliver a small increment in performance while increasing TBP by 50% and sometimes even beyond that.

As for the results achieved with CTR, 1usmus has provided results from two Zen 2 system. One is configured with the Ryzen 9 3900X (ASUS Rog Crosshair VII Hero) and the other is running the AMD Ryzen Threadripper 3960X (ASUS ROG Zenith II Extreme). Both systems were compared at default & tuned (CTR) settings.

Compared to the default AMD Ryzen 9 3900X CPU, the tuned variant delivers a 7% increase in performance while reducing the total CPU power draw by 12.8 Watts. The CPU runs at a higher frequency while maintaining a lower voltage of 1.225V versus the default 1.312V. 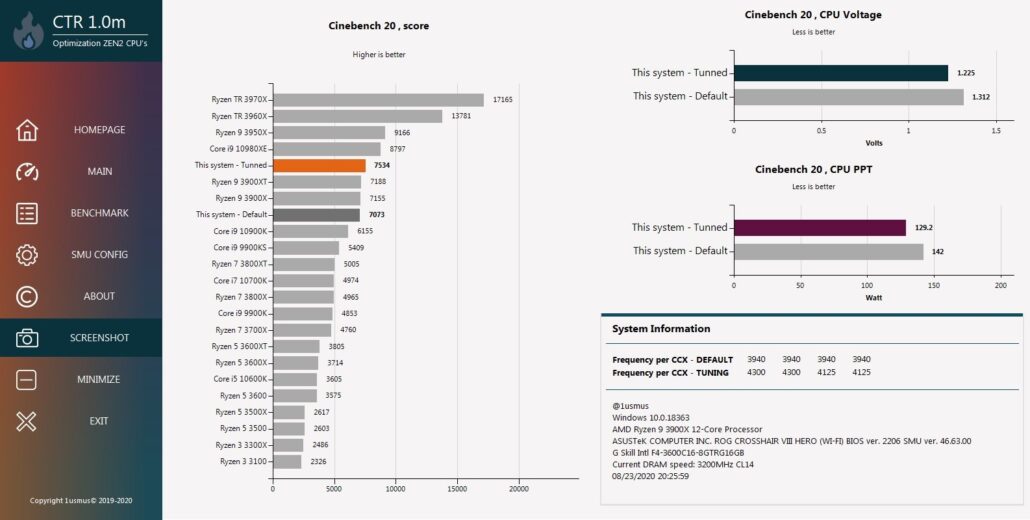 The AMD Ryzen Threadripper 3960X system saw a performance uplift of 5.2% and the total power draw dropped by 12 Watts. The CPU was also running at a lower voltage of 1.25V while maintaining stable clocks versus the default chip that was configured at 1.296V. 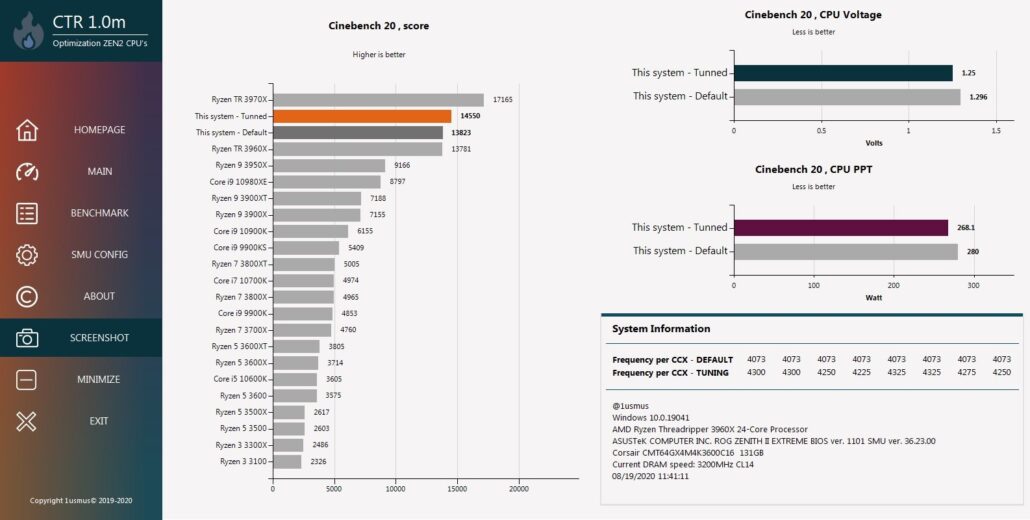 As for compatibility, the CTR software for AMD Ryzen CPUs is supported by all AM4 motherboards. Even if your motherboard doesn’t support CCX configuration for CCX, it would still work since the low-level SMU access is able to bypass any limitations imposed by CPU or motherboard vendors. It is also specifically stated that CTR doesn’t contain any unsafe code that may be perceived by anti-virus software as dangerous for the system. This was one of the major issues with the AMD DRAM calculator for Ryzen CPUs but has been fixed with CTR.

The NVIDIA GeForce RTX 3090 graphics card is the fastest in the Ampere lineup and can now be purchased at your local retail outlets. The reference Founders Edition variant will cost $1499 US. The NVIDIA RTX 3090 will feature a price of $1499 (MSRP) however custom models will vary depending on their design and the extra horse-power that they have to offer. For those who missed the train, we published a ton of performance metrics for the Founders Edition variant in our own review which you can check out over here.

Our very own Tech Editor, Keith May, concluded that the GeForce RTX 3090 is an amazing product for the right consumer who knows what to do with this beast of a card.

While the GeForce RTX 3090 was consistently 50% faster, or more, over the GeForce RTX 2080Ti the Achilles Heel of the RTX 3090 isn’t really its price so much as it is the RTX 3080. The GeForce RTX 3080 comes within spitting distance of the GeForce RTX 3090 and does so for much less of your money. So why would you go for the RTX 3090 instead? It’s simple, those who know they can use what the card offers will likely find great value in it, others might just want to have the absolute best on the market and past Titan sales have proven that person does exist. But folks like me who are simply PC Gaming enthusiasts might just find themselves better suited with the likes of the Ampere Flagship gaming card instead.

Since we built GeForce RTX 3090 for a unique group of users, like the TITAN RTX before it, we want to apologise upfront that this will be in limited supply on launch day. We know this is frustrating, and we’re working with our partners to increase the supply in the weeks to come. via NVIDIA

If you’re looking to purchase the Founders Edition graphics card, then you can head over to NVIDIA’s GeForce Shop webpage which is listed below:

If you’re looking for a custom variant, then we’ll be posting links for various AIB custom cards from various retailers once they go live.