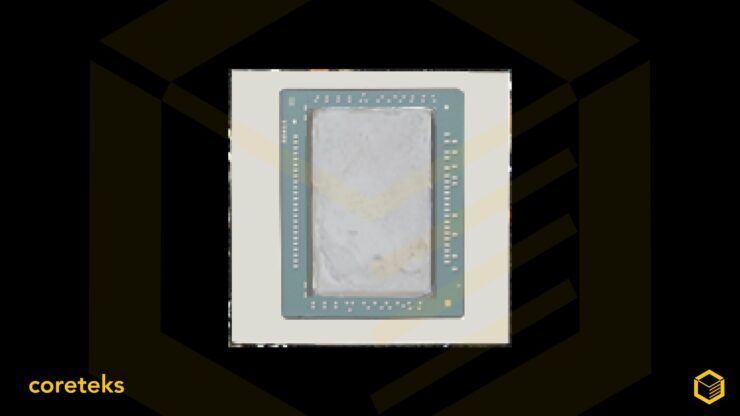 An alleged picture of AMD’s Big Navi “Navi 21” GPU which would power the next-generation flagship, Radeon RX 6900 XT, graphics card has been leaked out by Coreteks. Powered by the RDNA2 architecture, the AMD Big Navi GPU looks to be massive in size when compared to past AMD flagship GPU offerings.

Coreteks has removed all references and labels over the GPU die to mask his sources but he did state that the GPU we are looking at is indeed the Big Navi “Navi 21” GPU which is going to be featured on the flagship Radeon RX 6900 XT graphics card. The GPU seems fairly large & is said to measure at around 536mm2 though those are just rough calculations and the final die size could be higher or lower. The die size also seems to be close to the previous rumors which pointed out a 505mm2 die size for the flagship GPU.

One key aspect of this leak is that it shows the alleged Navi 21 GPU in a fairly standard die package. This would point out to a GDDR6 based memory configuration rather than HBM2(e) as many leaks have pointed out in the past. There is still some speculation that the Navi 21 XT and XL dies will be featuring standard GDDR6 configurations while the Navi 21 XTX die is going to utilize HBM2(e) sub-system for memory but that is speculation territory and hasn’t been confirmed yet.

The recent leaks along with the leaked PCB pictures of the card suggest that it would feature 16 GB of GDDR6 memory across a 256-bit bus interface.  Do note that 16 GB VRAM is also possible with a 512-bit interface so AMD is also open to that option when the final specifications are released. We a few weeks to go till the line-up reveal but AMD and the tech press are providing us with a handful of teaser and leaks in the meanwhile.

As for the designs themselves, the Radeon RX 6000 flagship cooling design looks amazing with the red and black design. The card features a triple axial-tech fan setup on the shroud and has a large aluminum heatsink that runs beneath it. The card has a LED-lit Radeon logo on the side and there is a large cut out on the side for the fans to vent out hot air. This design is very reminiscent of the NVIDIA GeForce RTX 20 series Founders Edition cooler. The card will feature dual 8-pin power and display ports would include a USB Type-C (VirtualLink), 1 HDMI, and 2 DisplayPort connectors.

The card also features a fancy backplate along with a retention bracket to hold the cooler in place. The Radeon RX “Big Navi” GPU looks like it will come in the standard 2-slot reference design which is the same as NVIDIA’s flagship RTX 3080 but not as huge as the triple-slot GeForce RTX 3090.

The AMD RDNA 2 based Radeon RX Navi 2x graphics card family is also touted to disrupt the 4K gaming segment similar to how Ryzen disrupted the entire CPU landscape. That’s a pretty bold claim from AMD themselves but leaks and rumors are suggesting that this might be the case for AMD’s next-generation Radeon RX graphics cards.

According to the roadmap shared by AMD, the RDNA 2 GPUs would feature three key features that will be part of the new GPU architecture. First and foremost is the performance per watt increase which is due to a number of reasons. AMD will be shifting from TSMC’s 7nm process to the more advanced 7nm process node. The new process node itself increases transistor efficiency on the new GPUs while decreasing its overall size, allowing AMD to cram more performance in a much smaller package.

The key changes that have led to a 50% increase in performance per watt include a redesigned micro-architecture with improved performance-per-clock (IPC), a logic enhancement that helps reduce design complexity and switching power, and physical optimizations such as increased clock speeds.

AMD has also announced that RDNA 2 GPUs would feature VRS (Variable Rate Shading) and hardware-accelerated ray tracing. AMD is following suit with NVIDIA here who have already implemented the said technologies on its Turing GPU based GeForce RTX graphics cards. With the launch of the new consoles from Microsoft and Sony imminent, AMD is going to work to provide these features with its own optimization framework to developers for integration within next-generation gaming titles.

AMD has also recently showcased its RDNA 2 GPUs running Microsoft’s DXR 1.1 (DirectX 12 API Ultimate) demo internally which utilizes hardware-accelerated ray tracing. AMD’s approach to ray tracing is to offer simplified development and speedy adopting and that is definitely possible through consoles where the mass majority of game developers focus their efforts towards.

AMD’s CEO, Dr. Lisa Su, has already stated that we can expect a new RDNA 2 GPU based Radeon RX high-end family and a 7nm RDNA refresh family to launch this year. The same was stated during the presentation in which it was stated that the “Navi 2x” lineup would scale from top to bottom and as the name suggests, would deliver twice the performance efficiency increase over the first-generation RX graphics cards. AMD’s CFO, Devinder Kumar also shed some light on the RDNA 2 GPU based Radeon RX products for the PC platform, stating that PCs will be first to get a taste of the new architecture in the form of the Big Navi (Halo) graphics card followed by mainstream GPUs.

“There’s a lot of excitement for Navi 2, or what our fans have dubbed as the Big Navi“

“Big Navi is a halo product”

“Enthusiasts love to buy the best, and we are certainly working on giving them the best”.

“it will go from mainstream GPUs all the way up to the enthusiasts and then the architecture also goes into the game console products… as well as our integrated APU products.

“This allows us to leverage the larger ecosystem, accelerate the development of exciting features like ray tracing and more.”

Some of the features to expect from 2nd Generation RDNA Navi GPUs would be:

One of the key features on the Big Navi Radeon RX GPU is that it is going to disrupt the 4K gaming segment, similar to how Ryzen disrupted the entire CPU segment. These are some bold claims by AMD, but if those rumored specifications are anything to go by, then these claims may not be that far fetched.

“With the Radeon 5000-series we are essentially covering 90-something-percent of the total PC gamers today,” says Chandrasekhar. “And so that’s the reason why no 4K right now, it’s because the vast majority of them are at 1440p and 1080p.

“That doesn’t mean a 4K-capable GPU isn’t coming, it is coming, but for here and now we want to focus on the vast majority of gamers.”

“Similar to Ryzen,” he says, “all of us need a thriving Radeon GPU ecosystem. So, are we going after 4K, and going to similarly disrupt 4K? Absolutely, you can count on that. But that’s all I can say right now.”

Once again, AMD in its own presentation emphasized enthusiast-class performance for the RDNA 2 based Radeon RX ‘Navi 2X’ GPUs so that’s something to consider. The competition however from the other side won’t just go eyes closed as AMD launches its high-performance graphics cards.